The second phase of the Polesworth Poets Trail began in 2010 with conversations around a new artwork to be created by world renowned artists Dalziel and Scullion. The artwork was to be a landmark that would be placed on the top of the coal tip mound at Pooley Country Park. The eventual piece known as Gold Leaf was installed and unveiled in 2011.

As part of the discussions it was established that the local people wanted to see the mining heritage of Pooley to be explored through an extension to the poets trail. Working with Warwickshire County Council, North Warwickshire Borough Council and Polesworth Parish Council the phase 2 project would see poems developed through a series of workshops organised by Mal Dewhirst.

Poets were invited to attend the workshops which explored themes relating to Pooley from the history of Pooley Hall to the lives of miners and their families to the natural environment as it takes over the post-industrial landscape.

The workshops saw talks from the Polesworth Society, a group of ex-miners and the rangers who work in the park. Poets were encouraged to submit poems for consideration to be included on the trail. The poems were selected by Dr Adrian Wallbank of Warwick University and Mal Dewhirst.

The project commissioned Mal Dewhirst to work with local school children to create a poem to be installed on the trail in the children’s playground. Mal ran workshops with the children at Birchwood Primary School from which the poem Kite was developed.

The phase two trail was established in 2011 and consists of seventeen poems with the following poems highly commended: 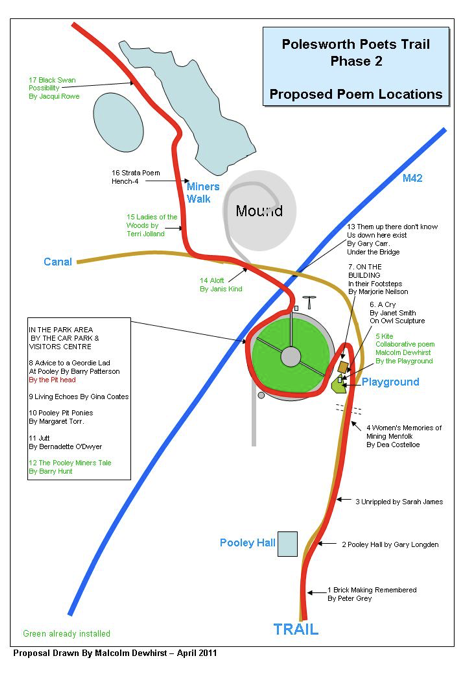